The sounds of live music will be echoing through Deadwood from Memorial Day through Labor Day at Outlaw Square! The Deadwood Live! Open-Air Music Series, presented by Oswald Entertainment Group, features Clay Walker on June 13th. 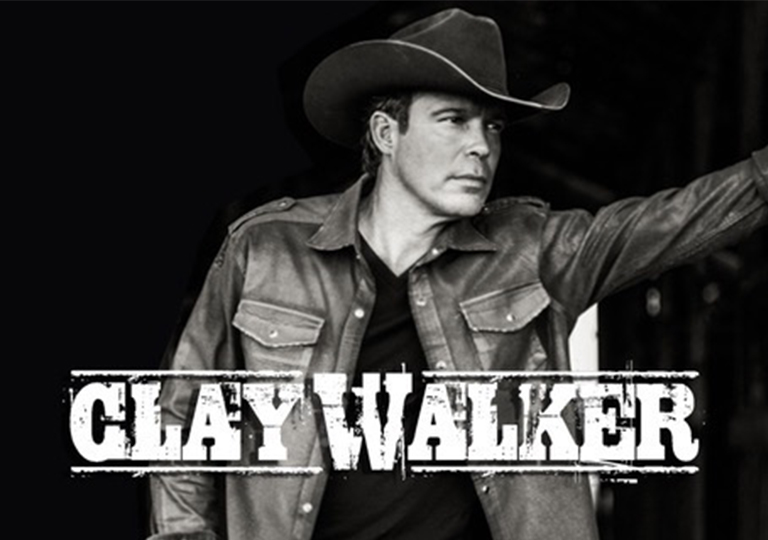 Can Clay Walker deliver? That’s the question, and he’s not afraid of it. In fact, he’s positioned himself to answer it squarely – one way or another – this year. With new creative and business teams and a deep well of hard-earned wisdom, Walker relishes the challenge. “I’ve prepared myself for this moment in my career – mentally, physically and artistically,” he says. “I’ve never been more ready.”

In a sense, the question is absurd for a recording artist, songwriter and entertainer with 31 charted singles, a dozen No. 1s, four platinum albums and decades of performances to his credit. Titles spanning 15 years and still receiving strong airplay include “Live Until I Die,” “Dreaming With My Eyes Open,” “This Woman And This Man,” “Hypnotize The Moon,” “Rumor Has It,” “Then What,” “The Chain Of Love,” “I Can’t Sleep” and “She Won’t Be Lonely Long.”

Walker’s still robust touring schedule – 80 shows last year – continues to fuel interest in his releases, most recently the 76-song compilation Clay Walker – The Complete Albums 1993-2002. Among them is the chart-topper “If I Could Make A Living,” which just celebrated the 25th anniversary of reaching its airplay peak, despite its singer showing no slippage in his celebrated matinee idol looks and megawatt smile. Meanwhile, Walker’s native Texas continues to be a centerpiece, whether it’s performing the National Anthem at the 2019 World Series in Houston, or giving back at February 2020’s Basin Strong concert benefiting victims and families of the recent shootings in Odessa.

Nevertheless, country music and the sounds embraced by radio audiences don’t wait on anyone. As Walker well knows. “I’ve heard all of the different attacks on country across time,” he says. “Complaints about how the music changed. I went back and listened to a lot of stuff from the ’80s – all the DX7 keyboards that came into the genre sounded so much alike. It was like some dumbed-down version of Chicago. It reminded me this is just the evolution of music, and it’s continuing.”

Walker, for one, is not complaining. He’s embracing … by working with many of the format’s top songwriters. “The style at radio right now is unique, but these writers really do approach it just like great writers from the past. When they get the hook, they try to point every line to that idea. That’s just great writing, and great writing never changes. Through this process I’ve found I absolutely can fit into this format. I can have a hell of a lot more hits.”

Often overlooked in Walker’s career has been the balance he’s had between writing his own material – much of it solo, including many of his biggest hits – and recording undeniable songs from outside writers. “As much as I love writing and would love to write every song, it’s not a smart move in most cases for an artist to write every song they record,” he says. “Let the music lead – get the better songs, however they come.”

Another way Walker is putting the music out front is an organic approach to production. “The combination we’re looking for is great writers who already are great producers or have the potential to record something that sounds like a master. In that sense, you’re actually writing the song in more of a complete way, as opposed to handing a demo to someone else and expecting them to make something out of it.”

The workmanlike approach to his craft and genuine humility point to a mindset he carries into the other major aspect of being an artist: live performances. “The biggest thrill for an entertainer is seeing that crowd – waiting, hoping, excited,” he explains. “Everyone is for you. They want you to sound great and put on the show of your life. You’ve got everything going for you before you even get onstage, so the only thing that can possibly hold you back is you. If that doesn’t get you revved up, you’re in the wrong business.”

Beyond years of experience in the spotlight, Walker remains a student. “I saw Van Morrison in Nashville last year,” he explains. “Sitting in the sixth row, I watched him do a 75-minute show at 69 or 70 years old. He never spoke, he just sang and his voice was crystal-clear. Pristine. It was like he was a conductor with the band and nobody missed a note. It sounded exactly like Van Morrison. I was in complete awe.

“I know exactly how hard it is to do that,” he continues. “The sound an artist hears onstage is nowhere near perfect – maybe at 30% of the quality the audience hears. I saw Boz Scaggs at the Ryman and, like Van Morrison, he never even hinted – not once – at sound problems. The entire show was seamless. No dead space. The communication onstage was so superior I couldn’t even tell how they were counting-in to songs. That’s mastery.

“What’s so exhilarating is you can’t stop, go back and re-sing a line you messed up,” he says. “Every word, every line counts in real time. Hanging over that edge with every note and nailing it? I stepped off the bus for a show in Houston – just stepped off the bus – and got chill bumps all over me, all the way to my scalp, anticipating that feeling. I’ve got chill bumps right now just thinking about it.

“That lets you know you’re doing what you were born to do, you still love it more than anything. And that’s the challenge I face every day. If I’m not onstage, on that edge, doing it in real time, then I’m working toward it. Constantly. And I’m lucky enough to have a lot of good people around me – onstage, in production, management – who understand the bar that’s set and how important it is to meet that challenge every time.”

Can Clay Walker deliver? Is he afraid of the question? Hardly. “If I had to lay out my ambition, it’s to become a master at what I do,” he says. “I’m a long ways from it, but that’s exciting as well because there’s a lot of road left.”